In what came as a major shock to the global community, American President Donald Trump, earlier this week, announced that he is suspending American funding to the World Health Organisation (WHO). The United States (US) president was critical of the WHO’s handling of the coronavirus pandemic, arguing that the body “failed in its basic duty”, relied too much on the Chinese government’s information and, therefore, should be held accountable. During a media briefing on April 14th, Trump announced,

“Today I’m instructing my administration to halt funding of the World Health Organization while a review is conducted to assess [its] role in severely mismanaging and covering up the spread of the coronavirus.”

His critics have since argued that Trump has simply used this decision as a diversion tactic, fending off criticism aimed at his administration for not only mishandling the pandemic but also not taking it seriously. Moreover, philanthropists like Melinda Gates have warned that suspending the funding is “as dangerous as it sounds” as the world needs the “WHO now more than ever”.

Even though the WHO has refrained from directly criticising the decision and President Trump, the body’s Director-General Tedros Adhanom Ghebreyesus has warned that the politicisation of the coronavirus pandemic can lead to many more deaths. He stated,

The WHO was formed in 1948 and was mandated to assist its member states with primary healthcare along with a supervision of global public health issues and emergencies. The WHO is made functional and operational through voluntary contributions from its member states. However, as seen in the chart below, the US is, by far, the biggest contributor to the WHO. Therefore, President Trump’s decision to suspend the funding can have far-reaching consequences in the fight against the coronavirus outbreak. 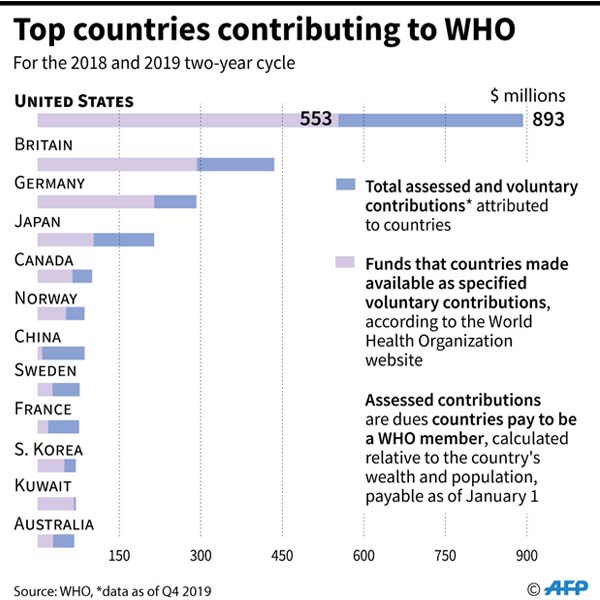 It is also worth noting that even though the Trump administration is now pinning nearly all the blame on China, the US president was all praise for the Chinese government in January for its tackling of the Covid-19 pandemic. On January 25th, Trump tweeted,

“China has been working very hard to contain the Coronavirus. The United States greatly appreciates their efforts and transparency. It will all work out well. In particular, on behalf of the American People, I want to thank President Xi!”

However, keeping aside Trump’s decision, a lot of questions have also been raised about how the WHO initially handled the situation. The body is accused of not taking the threat of Covid-19’s human-to-human transmission seriously in January.

On December 31, 2019, after gaining knowledge of the first coronavirus cases, the Chinese government informed the WHO of a pneumonia-like case in Wuhan. Then on January 14, 2020, the WHO shared initial Chinese investigations on the virus, stating that there was no evidence of human-to-human transmission of the virus. It was on January 22nd, following a brief visit to China, that the WHO stated human-to-human transmission of the coronavirus was happening in China. However, the WHO also took the position of praising China for its response and commitment to transparency in handling the outbreak.

Therefore, even though Trump did mainly use the WHO to divert blame for the shortcomings in his own leadership, his critique of the global health body still carries some weight.

Since the beginning of the pandemic, and following Trump’s WHO announcement and back to back accusations against China, many have now pointed out the visible and growing cracks in global, especially Western, cooperation to deal with this crisis.

Back in 2014, the US effectively responded to the Ebola outbreak by sending in medical supplies and troops to West Africa. However, this time around, the US is virtually absent from the global debate on the outbreak’s unified response. Nathalie Tocci, the director of the Italian Institute for International Affairs and a former European Union (EU) policy adviser, summarises the US absence in the following words,

“To me what is so striking is the complete absence of the US from public debates. The US is basically off the map, and China very much is on the map.”

Moreover, by calling it a “Chinese virus”, the Trump administration has already made its intentions clear of not wanting to cooperate with China on the pandemic’s global response. Secondly, the “idea” of the European Union has also come under question as Italy, amid its coronavirus crisis, felt it was abandoned by the EU member states. The EU Commission president Ursula von der Leyen issued an apology to Italy, on behalf of the EU, saying,

“Too many were not there on time when Italy needed a helping hand. And yes, for that, it is right that Europe as a whole offers a heartfelt apology.”

On the other hand, after announcing a state of emergency in March, Serbian President Aleksandar Vucic issued a call for help from China, stating that “the only country that can help us is China”.

In short, the coronavirus pandemic has effectively led the global community on a path towards a reset; this includes a reset of the global economy, healthcare facilities, bilateral and multilateral ties, and climate change policies. However, even with these developments, it is too early to predict whether the US will lose its status of a ‘global power’.